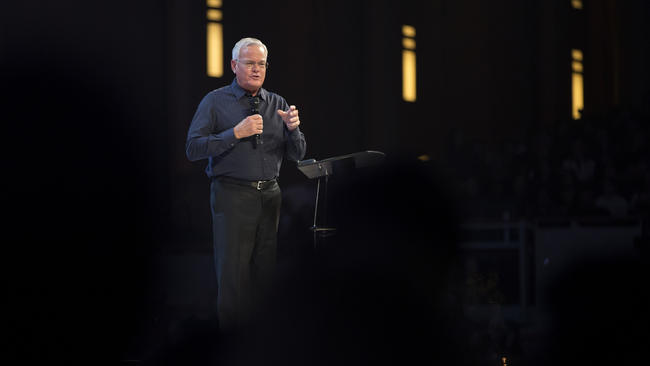 Sunday, after a long day of hanging at the lake with my family, we headed home and settled in to bed. My son woke up and needed to be put back down to bed, something that usually leaves me wide awake. I opened my phone to a plethora of tragic findings that broke my heart in a sickly familiar way.

A new report says Pastor Bill Hybels of Willow Creek church groped his assistant repeatedly over the span of years. These allegations pile up against that of many others that have come to light in the last year. These allegations have been systematically denied by Hybels, as well as Willow Creek Church, which he founded in 1975. Ten women have now come forward. Hybels had already stepped down from Willow Creek amidst these allegations in order to “not get in the way” of the church’s future.

And as I sit here and try to make sense of it all, I find my heart aching and brooding in the same old way. Another blow drives a deeper bruise in the same real estate of my heart. That is because, in my short 28 years of life and roughly 9 years of ministry, I have seen many pastors fall like this. Pastors I looked up to. Pastors I respect. Pastors I have worked directly under. It’s a pain that’s all too familiar.

But what is even more troubling than the alarming rate in which evangelical powerhouses fall is the justification or dismissal by the rest of Evangelical leaders, whether publicly or in private. Despite the freight train of train wrecks gaining speed, it’s still the 800 pound elephant in the room. When I bring this topic up in some pastor circles I’ve been a part of, usually one or two responses happen. Either 100% of the blame is placed solely on the individual and not the church or institution, or that saying wide changes in the church is “painting with a broad brush”. In other words, just because there’s something wrong with them, doesn’t mean there’s something wrong with us.

Willow Creek is not unique in this event, but we do get a very unique look into the process that followed. They had “family meetings” about the accusations and the elder board’s response. You can actually find uploads of them on YouTube. They outline the allegations. Read out loud emails from the women. They tell a story of how investigations were launched, elders taking sides, etc. I think that these sinful, broken people on the elder board were trying to do the best they could with allegations about a sinful, broken person (Hybels) made by sinful, broken people.

That being said, three things gravely concern me.

1. We must Recognize Moral Failure amongst leadership is systemic.

It seems that this is becoming the backdrop of our Evangelical culture. From the small scale of youth groups needing a reset every 3-5 years because the youth pastor failed out to large seminaries, churches and denominations facing failure. Unfortunately, both the leadership in churches I have asked personally and the large scale leadership in places like Willow Creek fall short of asking the tough questions. What is is about our current church leadership models and structures that create such a giant pit that pastors are falling down? What sort of expectations are put on them that are crushing them at alarming rates? What relationships are lacking in their lives that isolates them into these places?   Don’t get me wrong, the act of sexual abuse, or abuse of power, affairs, embezzlement, etc. Is a choice, and those that do these things bear the responsibility. But I don’t believe they should bear 100% of that responsibility. In fact, I have personally seen elder boards and other leadership structures wash their hands of wrongdoing, placing all the blame on the pastor. One church I was a part of had 4 pastoral moral failures in the span of 9 years. Yet their response was, “this was their choice.” No willingness for self examination. No sober realization of unhealthy expectations or structure.

2. We have to believe and support victims.

In recent history, we have seen the Evangelical church almost become an oppressive power structure when it comes to victims. In the case of Paige Patterson, there was an egregious abuse of power and suppression of the truth. I Timothy 5:19 (ESV) says “Do not admit a charge against an elder except on the evidence of two or three witnesses.” While it’s not impossible for an allegation to be false, Paul laid out some pretty clear ecclesiastical commands for admitting accusations when there are multiple victims. In some ways, the #MeToo movement needs to sweep through the church in a redemptive way, so that the abusive situations and structures can be expose and addressed. I believe that, had the heartbreaking events of Willow Creek been met with a board who would’ve taken the victim’s stories more seriously, they might be facing a much healthier outcome than the massive fallout that’s sure to follow. Teaching pastor Steve Carter’s sudden exodus of Willow Creek is clear evidence of this.

3. We must continue to believe in the church of Jesus Christ

I hesitate to speak of these things for fear of coming off as condemning of the church, or to give such ugly things publicity. It’s like a bad wound. It might make you sick, but you have to look at it. See how deep it is. Clean it out. Bring healing to it. I look at these issues openly and honestly because I still love and believe in the gospel, in the call to make disciples across the earth. I believe in the unity of the church and the witness of the churches love as a universal sign to the world that we belong to God (John 13:35). If we can ever hope to reflect that more perfectly, then we must address this issues openly and honestly.